Triangle for Latino Student Success (TLSS) is a joint project of the Adelante Education Coalition and Hispanics in Philanthropy, both of which have a rich history of working in North Carolina’s Latino communities. The project focuses on direct involvement in three counties near the Research Triangle: Durham, Johnston, and Wake. The project’s design is based on the belief that advancing Latino student success requires the meaningful and deep engagement of Latino leaders and communities. With this in mind, the project will build deeper relationships between Latino families, educational institutions and key stakeholders from multiple sectors. 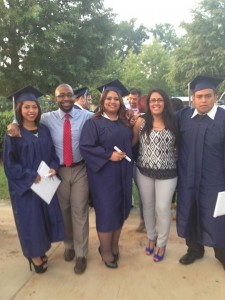 The Triangle program will expand and scale up a number of interventions that already have a proven track record of creating pathways to success for Latino students:

According to the census, North Carolina’s Latino population grew by nearly 600% between 1990 and 2008. Latinos now make up eight percent of the state’s population and 14 percent of the state’s under-18 population. In the project’s target counties of Durham, Wake, and Johnston, Latino students have a dropout rate of over 50 percent—which means they are twice as likely to drop out as other students in the region. In these three counties, anywhere from 84 to 91 percent of Latinos do not speak English at home. Administrators, teachers, and guidance counselors often lack cultural and linguistic support systems to effectively serve the Latino population, whose fast emergence in the area has presented them with a new and unfamiliar challenge.

Nevertheless, the Triangle region offers strong assets to build on. With 25 institutions of higher education, more educational resources are clustered here than in any other area of the state. Productive partnerships exist between the region’s community-based organizations, such as the members of the Adelante Coalition, K-12 schools, and universities, offering clear opportunities to create culturally relevant support systems.

Your input is important! Post comments on this story to let us know how you feel about the new look of the website. As of right now, we are still deciding a color scheme, making new banners, and … END_OF_DOCUMENT_TOKEN_TO_BE_REPLACED

WHAT YOU CAN DO: Sign Up for Updates: Fill in your email address and zip code using the form on the right of this page. Follow this link to raise your voice with Legislators. You can send an email to your state Senator and your state … END_OF_DOCUMENT_TOKEN_TO_BE_REPLACED