Let’s Learn NC is project of the Adelante Education Coalition. This project advocates for the same college tuition for ALL North Carolina students, because higher education should be accessible to all state residents. To learn more about our efforts and the state of education for undocumented students in North Carolina, select a section.

FACT: Having an educated workforce is a key driver of economic growth and the most important indicator of one’s potential earnings over a lifetime.

FACT: by 2020, 61 percent of jobs in North Carolina will require higher education. Job growth is expected to increase by 21 percent in the same period.

“They are part of our future, so it only makes sense to lower barriers to additional educational advancement and achievement….The more education they attain, the better positioned they are to become contributing citizens,” said Republican State Sen. Lloyd Smucker of Pennsylvania after introducing legislation for his state to offer in-state tuition to qualified undocumented students.

FACT: The estimated total net benefits to the economy of one graduating class of undocumented students who take advantage of Maryland’s in-state tuition policies are approximately $66 million in 2011 dollars.

“Are we going to send these young people on a path to be successful and be part of the Texas success story? Or are we going to prohibit them because we’re not going to allow them to be able to afford to go to a university, and basically put them over onto government subsistence?”-Republican Gov. Rick Perry.

[References for these facts are available upon request.] 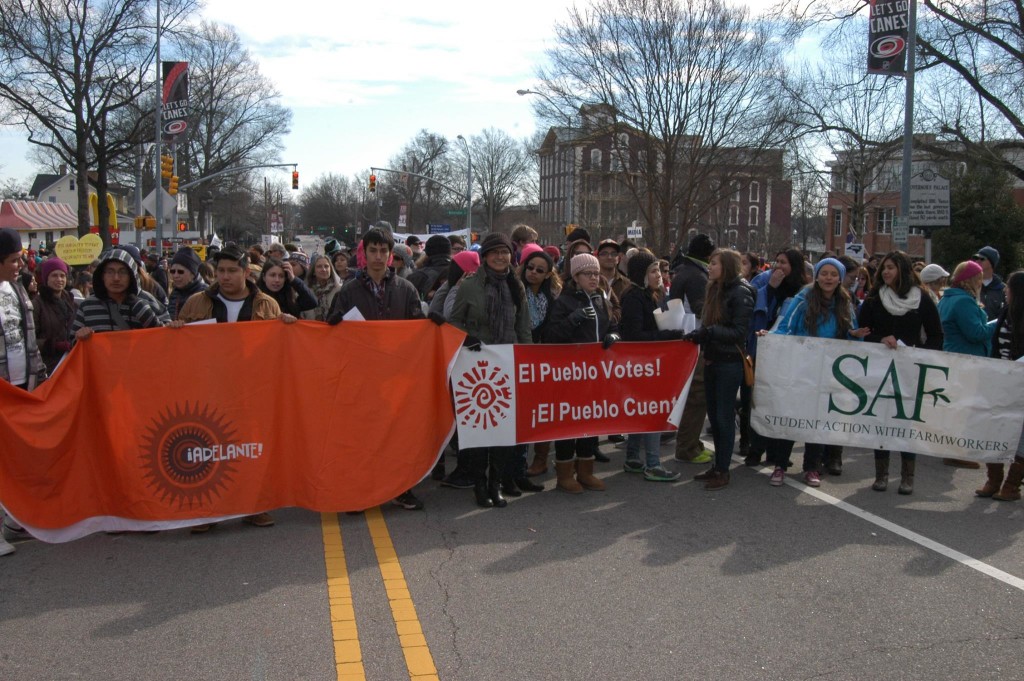 WHAT YOU CAN DO:

Continue to check back here and on our events page for updates and new initiatives.

1982
The Supreme Court ruling Plyler vs. Doe in 1982 guaranteed the right of all students, regardless of immigration status, a high school education.

2003
Sen. Eric Reeves (D-Wake) introduced SB 987: Increase Access to Education, which would have allowed an individual who has attended school in North Carolina for at least four years and received a high school diploma from a school within North Carolina or has obtained a general education diploma (GED) issued in North Carolina to be accorded resident tuition status. The bill died in committee.

2004
The NC Community College System (NCCCS) issued a memo stating that local community colleges have the discretion to implement admissions policies that permit the enrollment of undocumented nonimmigrant applicants in curriculum, continuing education and basic skills programs. Undocumented nonimmigrant applicants do not qualify for in-state residency for tuition and shall be charged at the out-of-state tuition rate for curriculum programs.

2005
Rep. Rick Glazier (D-Cumberland) introduced HB 1183: Access to Higher Education & A Better Economic Future, which would have allowed immigrant students who are accepted to any North Carolina public university or community college, and who have graduated from a North Carolina high school and have lived in the state for at least 4 years, to be permitted to pay in-state tuition. The bill died in committee.

2007
On November 7, the NCCCS released a memo stating that to comply with the State Board’s regulation requiring an open-door admission policy to “all applicants” and notwithstanding any policy of the local board, colleges should immediately begin admitting undocumented individuals. Undocumented individuals must be assessed tuition as “out-of-state” residents, subject to any tuition waivers granted by the General Assembly, such as Learn and Earn. On December 6, the NCCCS selected Scott Ralls, President of Craven Community College, to succeed Martin Lancaster as the new system president. Craven CC was one of the colleges that did permit undocumented students to enroll.

The UNC Tomorrow Commission recommended that the UNC system study the costs and benefits of offering in-state tuition to undocumented students at its 16 university campuses.

2008
On May 13 the NCCCS changed its admissions policy to reflect the General Counsel’s advice to no longer admit undocumented students at any of the 58 schools. In July the Department of Homeland Security and NC Attorney General clarified that the NCCCS can decide admission criteria and that admitting undocumented students is not in violation of federal law. At their August 14-15 board meeting, the NCCCS board voted to keep the ban on admission until they could adequately study the issue.

2009
The NCCCS hired John B. Lee, president of a consulting firm specializing in postsecondary education policy research  in MD, to conduct their Admissions study. Based on the study’s recommendation, the NCCCS drafted a policy to admit undocumented students to community colleges and held a public hearing regarding the issue.

2010
The NCCCS passed a policy to admit undocumented students to the state’s 58 NC community colleges, with the  following restrictions: (1) undocumented students must pay out of state tuition, $7, 700 per year and, and (2) an undocumented student can be removed from a class that is full, if a legal resident or citizen wants to take the class. The rule will become law when the NC General Assembly adjourns unless a bill is passed that disapproves the rule.

2012
On June 12th, President Barack Obama announced temporary protection for youth under “deferred action.” The Deferred Action for Childhood Arrivals, or DACA, allows youth who fulfill certain requirements to apply for a “work permit” during this two-year renewable period.

2013
Representatives Paul Luebke (D-Durham), Rick Glazier (D-Cumberland), Tricia Cotham (D-Mecklenburg), and Charles Graham (D-Robeson) introduced HB 904: The In-State Tuition/Some N.C. Immigrant Youth Act, which would allow all young people who have graduated from North Carolina high schools and lived in the state for at least two years to pay the in-state tuition rates at our public colleges and universities. The bill passed its first reading and was referred to the Committee on Education. In September, The North Carolina Community College systems announced those students with DACA are eligible for business sponsor exemptions, which would allow them to attend colleges within the North Carolina Community College System at the in-state tuition rate.

2015
On March 25th, Senator Fletcher Hartsell (R-Concord) introduced Senate Bill 463 with bipartisan support, calling for any individual who has attended school in North Carolina for at least three consecutive years immediately prior to graduation and has received a high school diploma or a general education diploma (GED) in North Carolina be granted resident tuition status.

On September 5th, the Trump Administration rescinded the Obama Era temporary protection program for childhood arrivals or DACA. The Administration gave congress until March 6, 2018 to come to a solution or young people with DACA will see there protected status end as their DACA expires.

Your input is important! Post comments on this story to let us know how you feel about the new look of the website. As of right now, we are still deciding a color scheme, making new banners, and … END_OF_DOCUMENT_TOKEN_TO_BE_REPLACED

WHAT YOU CAN DO: Sign Up for Updates: Fill in your email address and zip code using the form on the right of this page. Follow this link to raise your voice with Legislators. You can send an email to your state Senator and your state … END_OF_DOCUMENT_TOKEN_TO_BE_REPLACED